I saw a bumper sticker that said "Save the Ta-Tas". I was quite
surprised by this.

Posted by John Coffey at 9:49 AM No comments:

How I see life.

Now that I am over 50 I see life a little differently.

First and foremost, I think that life is a big con. Most of things we are told or think that we know are either outright lies or spin. It is in human nature to present things in a way that works to our advantage, and we create complex realities that when broken down to the essence don't mean very much.

Our entertainment is remarkably hedonistic and/or narcissistic. It has no real value except for the fact that entertains us, which I suppose does give it some value. We make heroes out of entertainers, when real heroes are largely ignored. I am concerned about the "garbage" entertainment that has a corrupting influence on society and youth.

We waste time on trivial things for the sake of wasting time.

Our politics are mostly about benefiting ourselves at the expense of others.

In my mind, the difference between adults and children is not a matter of age, but a willingness and ability to do things that we don't want to do. The World War II generation understood this. Later generations less so.

However, I see hope in hard times because it forces people to be more efficient and moves them back to some sense of "values." Oddly enough, I think that the country is moving in the right direction. I just don't know where we will be a couple of decades from now.

John Coffey
Posted by John Coffey at 10:45 PM No comments: 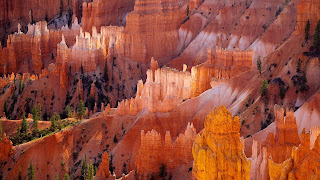 <<hills.JPG>> One thing interesting about this picture is that life
will exist anywhere it can get a foothold.
Posted by John Coffey at 1:16 PM No comments: