Somebody at the Columbus Chess Club has this little chess clock, and said that they only paid $18 for it.  For $18, I think that it is pretty terrific.
https://www.amazon.com/Compact-Digital-Chess-Clock-LEAP/dp/B00NIFO8FM/ref=pd_lpo_vtph_201_lp_img_2
Less than $15 on ebay:  http://www.ebay.com/itm/like/232118763370
Wholesale chess has their own version of this clock which costs more:  https://www.youtube.com/watch?v=iHgneZ-7GY8
The clock has a low profile, which means that it is not as tall as most chess clocks.  It is also a little smaller than average.  For me, with a bad, and recently often painful shoulder, it took a little extra effort to hit the button.  I had to reach ever so slightly further, but my shoulder noticed the difference.  I don't think that it is noticeable for anybody else.
The clock has options for both increment and delay, but according to the manual you cannot use both at the same time, which is no big deal.  It also has a count up mode.
The clock is really easy to set.    I thought it was easier to learn how to set the clock by just experimenting with it, than it was to read the slightly confusing English/Chinese manual.  The clock only remembers the last time control you set.  This is not as a big of deal as it sounds, because it is pretty easy to change the time control.  You reset the clock by turning it off and on.
The clock only supports one time control.  If you had more than one time control with the same level of increment or delay, then maybe you could use the count up mode, or for something like 40/2 d5 followed by G/60 d5 you could set the time to 3 hours.
At this price it was for me a no brainer to order one.  The clock appears to be well made made enough, although a little on the cheap side, naturally.  However, even if it wears out in a year, I still will have gotten my money's worth.
--
Best wishes,

http://www.entertainmentjourney.com
Posted by John Coffey at 12:09 PM No comments: 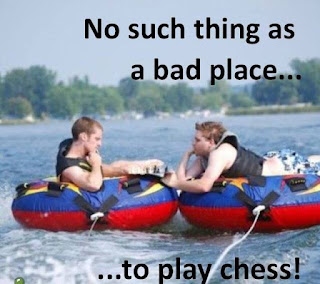